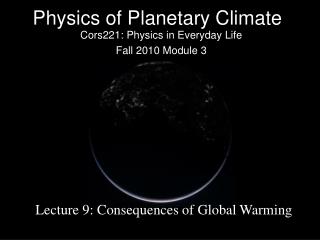 The Physics of our Climate

The Physics and History of Climate - . dan britt university of central florida. psc 1121. this course is an introduction

Climate Physics and the Problem of Abrupt Climate Change - . presentation given to the geo 302c april 8, 2005. charles

Institute of Geophysics and Planetary Physics University of California, Los Angeles - . themis observations at a substorm

Examples of Planetary Nebula - . all images have been obtained from the astronomy picture of the day website. note the

Planetary model of atom - . electrons. positive charge is concentrated in the center of the atom ( nucleus) atom has zero

Theories of Planetary Motion - . part 1: geocentric theory. why should they study astronomy. one main reason… survival

The Physics of Climate Change Prof Tom Choularton - . everybody talks about the weather – but nobody does anything

Laws of Planetary Motion - . it’s the law!!!. remember…. a law is a mathematical description of some phenomenon. it