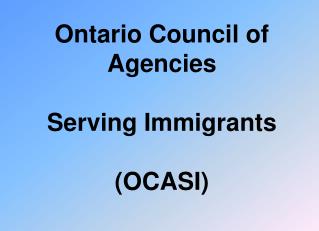 All About Serving Size - Mixed dishes. all about serving size. use the food pyramid to make sure you eat the right

An “Ontario Initiative” Securing Sustainability for the Future of Aquaculture - . lyndon fish hatcheries

New Immigrants - . the united states has been called a nation of immigrants of all the groups who made america, only

The Diversification of Teachers in Ontario: Multiple Pathways with Different Detours and Destinations - . antoinette

Agencies &amp; the Three Branches of Government - . where do agencies fit within these three branches? what is the

Access to Professions and Trades in Ontario - . shamira madhany. each year ontario receives over 100,000 immigrants. 60%