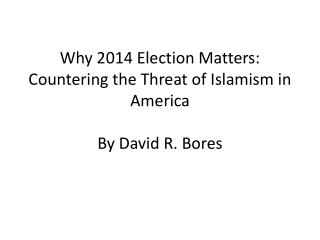 Why 2014 Election Matters: Countering the Threat of Islamism in America By David R. Bores Why 2014 Election Matters: Countering the Threat of Islamism in America By David R. Bores

It’s Election time ! - . what issues are important to you? who do you think will be a good mp?. big fish party. teach

Weightier matters of the Law - Judgement - . study 5 – “where is the god of judgement?”. qualities of the

Life After Washington Another War Election of 1796 A. First openly contested election - B. federalists nominate john

Stereotype Threat - . the risk of confirming a negative stereotype about one’s group as self characteristic. steele,

Deception in Macbeth - . mary ntalianis and beth allday. introduction. throughout macbeth things are not always as they

What to do in a blackout… - . by el, t yler and t olu . blackout causes. one of the main reasons there will be a

Predestination and Election - . difficult passages. four possibilities of salvation . god could have planned not to save