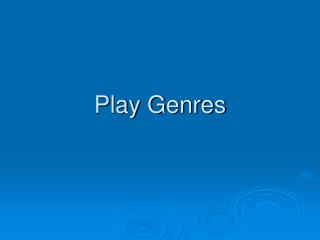 Play Genres. Genres . Genre  is a French word meaning "category" or "type." The choice of  genre  reflects the writer's  point of view  towards his  subject . The two oldest  genres , dating back to the fifth century BCE, are tragedy and comedy . Comedy and Tragedy. Genres - . poetry. type of literature in which words are carefully chosen and arranged to create certain effects. (uses

Genres - . fantasy. fantasy is a genre that uses magic and other supernatural forms as a primary element of plot, theme,

Genres - . know what you want!. genre definition. pronounced: zhän ’ re ( french) a particular type or category of

Genres - . what are they?. genre. genre is a french word which means “type or kind” we use genres as a classification

GENRES - Rhythm and blues , often abbreviated to  r&amp;b  and  rnb , is a genre of  popular african-american