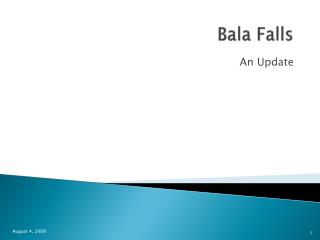 Bala Falls. An Update. August 4, 2009. Overview. The proposed hydro generating station at Bala Falls remains front and centre as an issue of concern to residents and cottagers.

At the conclusion of this presentation the learning will be able to: - Appropriate staffing for a healthy work

3.1 The Indo-Europeans - . indo-europeans migrate into europe, india, and southwest asia and interact with peoples living

Transaction Processing - . chapter 16. transaction concept. a transaction is a unit of program execution that accesses

HYDRO POWER PLANT - . introduction. hydro power. 1) one of the most widely used renewable source of energy for generating

Screening Tools and Evidence-Based Exercise for the Patient At Risk for Falls - . ncpta fall conference october, 2012.