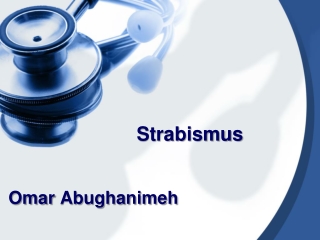 STRABISMUS - . by: audra bishop beth moline elisabeth cohen. strabismus. occurs when both eyes do not look at the same

STRABISMUS (SQUINT) - . amaka azie gpst2. it is a condition in which the eyes are misaligned can lead to amblyopia in

Strabismus: Ugh! - . if it is strabismus, it can be diagnosed with a cover test. the obvious and the not so obvious. two

strabismus sumalee boonyaleephan - Anatomy of the extraocular muscle primary position: eye is directed straight ahead and

Why worry about strabismus? - . [1,8]. initial presentation. most (75%) parents detect abnormality.

Amblyopia - . mutez gharaibeh,md assisstant professor univ of jordan. 2-4% of the general population. the most common

Common Eye Conditions - and the role of the pharmacist - . optometrist association of australia pharmaceutical society of