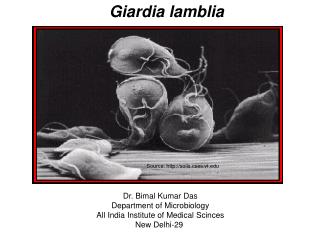 Giardia Lamblia - . introduction. it has a worldwide distribution and is the most common pathogenic protozoan isolated

The Life Cycle of Giardia Lamblia - . giardia lamblia the cysts, are oval measuring from 11 to 14 µm in length and

Giardia - . hazard identification what is giardia ? giardia is a single-celled flagellate protozoan parasite belonging to

Giardia and Other Protozoa - . giardia duodenalis cyst and trophozoite. most common human parasite in usa, especially

Prevalence of Giardia Cysts and Cryptosporidium Oocysts and Characterization of Giardia spp. Isolated from Drinking

Giardia duodenalis ( G. lamblia ; G. intestinalis ) - . giardiasis. most distinctive of the flagellates. has both a