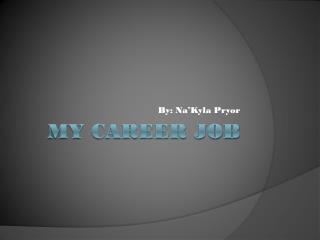 My Dream Job - . when i was little, i wanted to be an astronaut. i loved reading science-fiction novels and looking up at

My Perfect Career - . how to choose the right career for you! nancy stubblefield, m.ed. academic advisor university

Choosing A Career - . rule#1: choose a career that is something you really like to do. if you can get an employer to pay

Skills + Hobbies = great career - . job vs. career. job- something you do in order to be paid money or other needed

My future profession and career - . what does the word “job” mean?. a job is the work that a person does regularly in

My Ideal Job - . a teacher by: alejandra valerio. examples on how to be a teacher. teachers help little kids on how to

My Dream Job - . there is no dream job in 2023. there are just dream projects (micro-tasks) lasting 2 days to 2 months to

My career dream job - . by andrew maguire. landscape gardening prices . we asked which? local-recommended gardeners and

Choosing Your Career - 1. choosing your career. 1.1 jobs and careers 1.2 coping with change and reinventing yourself.