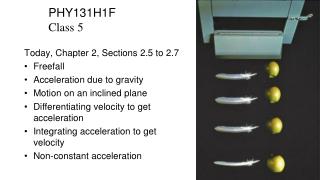 PHY131H1F Class 5. Today, Chapter 2, Sections 2.5 to 2.7 Freefall Acceleration due to gravity Motion on an inclined plane Differentiating velocity to get acceleration Integrating acceleration to get velocity Non-constant acceleration. Clicker Question.