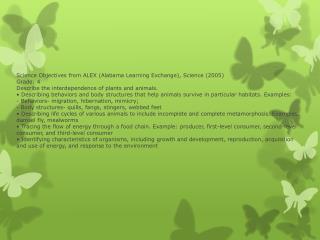 Ecology - . the study of interactions between organisms and their environment what role do bacteria play in ecology?.

Animal Nutrition - . 0. 33. food is taken in, taken apart, and taken up in the process of animal nutrition in general,

AP Ecology Unit - . chapters 52- 56. chapter 52. an introduction to ecology and the biosphere. overview: the scope of

Ecology - . what is ecology?. ecology is the study of interactions between organisms and the living and non-living

LIFE CYCLES AND GROWTH OF PLANTS AND ANIMALS - . how do plants reproduce? when a plant grows, it goes through a series of

Life in the Forest Big Question: How do plants and animals live together? - . author: claire daniel illustrator: genre:

Coordination and Response in Plants and Animals - . introduction. response of plants and animals. syllabus objectives

Organization of Life - . biosphere. ecosystems. communities. populations. organisms. what is an ecosystem?. an ecosystem

How do we learn together at school? - Concept question what is a community?. unit 2. what does a family do together?. how

Benefits of Soil Organisms - . what kinds of plants and animals live in the soil?. 1) bacteria: most numerous and