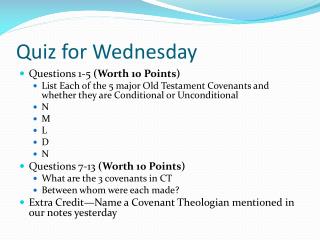 Class Quiz - . based on chapter 5. name the four main types of law-making powers under the constitution. concurrent

Quiz: Feb 3, 2005 - Write the names and formulas for the ionic compounds formed by these ions: calcium and oxide

Fire Safety Quiz - . most fires happen at night while you’re asleep. true or false?. answer: true. 2. if your clothes

Week 7 Quiz - . 1. you’re in a dark room taking pictures with flash. when you change your aperture and iso sensitivity,

Geography Week Daily Geography Oddities Quiz - . monday initial theories of this crater were that it was formed by a

Whimsical Wednesday - T ake out homework (don’t turn in yet! keep at your desk!) answer the catalyst below: 1. how

Q uiz on Wednesday ! - . it will be a blank chart. i’ll give you the nominative singular and genitive singular

Hey SENIORS! Leave your gear in the back it’s a quiz day - . seniors… wednesday start-up pray for family and friends