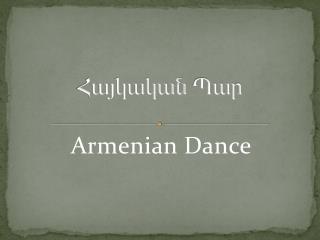 Հայկական Պար. Armenian Dance. History. Armenian dance is one of the oldest, richest and most varied types of dance in history. Rock paintings of scenes of dancing have been found from the 5 th to the 3 rd millennia B.C. in regions of Armenia.