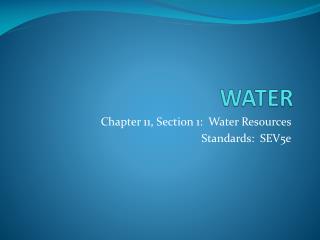 WATER. Chapter 11, Section 1: Water Resources Standards: SEV5e. The Water Cycle. The same amount of water had been on the planet for billions of years. The water you drink today is the same water dinosaurs drank! Water is a renewable resource that is recycled through the water cycle.

Water Environment - . water is essence of life. sr. eliane ilnitski, ssmi. water for the earth. beauty of water. the

Water and the Fitness of the Environment - . introduction. water makes life possible. all organisms are made mostly of

3.6 Water Resources - . water, water everywhere and not a drop to drink! . connections between water resources and food

Water in Norway - . what is water?. water is very important for life 70% of earth is covered with water. facts about

Water, Water, Everywhere - . lakes are large bodies of water that are surrounded by land and are not connected to an

WATER - . content water and water consumption why do we need water? viv who gets water? water additives challenges with

Chapter 11: Water - . why is water so important?. water is the most abundant substance in the body average healthy adult

How I Use Water - . by marilee mrs. wing’s class. i drink water to stay alive. i use water to grow vegetables. i use

A quick summary of the egg lab - . arslan aziz sswims december 2002. what did we do?. test our predictions for what would

Water and Watersheds - . maia mcguire, phd marine extension agent. water…it’s all around us. 97% of the water on