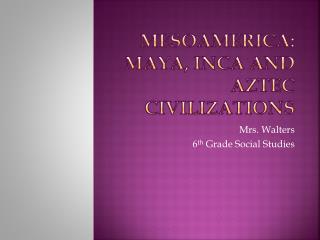 CLIMATE AND LAND USE CHANGE IN PACIFIC MESOAMERICA - . challenges for conservation of biodiversity and sustainable

INCA Head Start Parent Orientation - . welcome to our school!. what is head start?. head start is a federally funded

Ancient Cultures of Central and South America: The Maya, Aztec, and Inca - . mayan map. the mayans. traced back to 1500

Ancient Mesoamerican Civilizations - . the olmec, maya, aztec, and inca. at the height of power timeline. the olmec. the