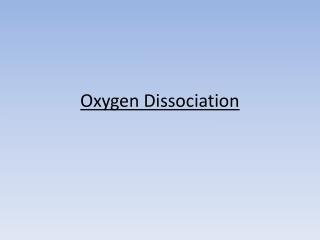 Oxygen Dissociation. S-shaped ( sigmoidal ) curve that shows the partial pressures of oxygen (PO 2 ) in relation to the % saturation of haemoglobin. At 50 % saturation (indicated on the curve by p50), half of the haemoglobin binding sites contain oxygen molecules.

Carriage of Oxygen - . aims: to learn the role of haemoglobin in carrying oxygen to learn the significance of the

OXYGEN EQUILIBRIUM AND TRANSPORT - . chapter 8. how does blood carry

10. The Variety of Life - . 10.2 oxygen dissociation curves. starter. what is the structure of haemoglobin?. learning

Transport of Oxygen and carbon dioxide - . learning objectives. at the end of this session students should be able to

RESPIRATORY GAS TRANSPORT - . oxygen transport. 98.5% oxygen in arterial blood is bound to hemoglobin and 1.5% is

Bohr Effect - . alterations in hemoglobin’s structure shift to the right in the oxyhemoglobin dissociation curve