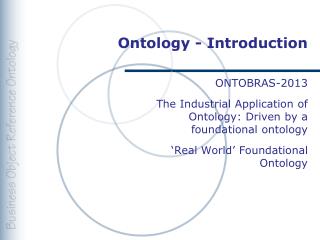 Ontology as a Branch of Philosophy - . a brief history of ontology. aristotle (384 bc – 322 bc) realist theory of

An introduction to the Semantic Web for Museums - . presented at museums and the web 2006, albuquerque. dr mike lowndes,

Ontology - . an introduction and overview. the concept of ontology. ontology have something to do with meaning it is used

Introduction to Semantic Web and Ontologies - . hasan tÜrksoy compiled, partly based on various online tutorials and

Ontology Engineering - . nguyen trung lap. contents. what is an ontology? what is the usefulness of an ontology?

Introduction to Ontology From Carnap and Quine to Hilary Putnam - . @ emanuelrutten vu

Ontology Editors - . ides for ontologies. some people use simple text editors doing this with the xml serialization will

An Introduction to Ontologies in OWL - . bibliography the owl guide the owl overview description logic slides from enrico