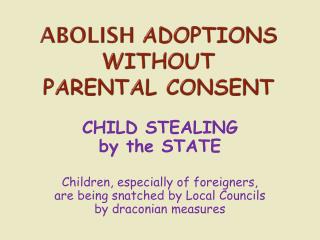 ABOLISH ADOPTIONS without parental consent. CHILD STEALING by the STATE Children , especially of foreigners, are being snatched by Local Councils by draconian measures. SAY IT in HEADLINES. Outcry over rise in forced adoptions - The Guardian - 14/08/07 Psychological and Parental Competency Evaluations - . helen t. brantley, ph.d . who is the client?. for parental

Welcome to Medical Consent Training - . this training is for anyone who makes medical decisions for children in the legal

C Pointers - 7. c pointers. addresses are given to us to conceal our whereabouts. saki (h. h. munro) by indirection find

Disclaimer - . this presentation is the property of marketlinx solutions™ and is intended for the exclusive use of

PART THREE - . use and disclosure - consent or authorization not required (continued). judicial / administrative

Agency - . the key to . . . something. agency is a relationship. consent shown to one person (agent) act on behalf of the