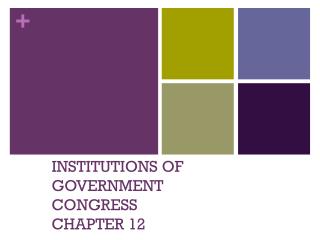 Chapter 12: Section 2 Reaction and Revolution - . the congress of vienna. when the great powers of austria, prussia,

Congress - . the national legislature. why does the constitution divide power between the two houses of congress? what is

The First Branch of Government - . the united states congress. 3 types of behavior. advertising nobody’s senator but

American Government - . chapter 12: the bureaucracy. what is bureaucracy ?. a large organization that is structured

Chapter 12 Reconstruction and Its Effects - . section 1 the politics of reconstruction. lincoln’s plan for