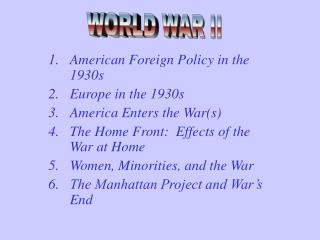 American Foreign Policy - . key questions to be answered by end of lesson…. what is foreign policy ? what should be the

1930s in America - . leah. wall street crash and the great depression. when the wall street stock market crashed in

The War in Europe - . operation overlord. planned from 1942-1944 invasion across the english channel into nazi-occupied

The 1930s - . the great depression and the jim crow south. dorothea lange. photographer who travelled around the united

The 1930s - . the good times… end . what problems of the american economy were exposed by the market crash and the