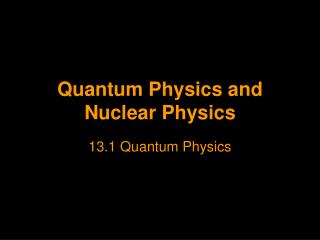 QUANTUM AND NUCLEAR PHYSICS - . wave particle duality. in some situations light exhibits properties that are wave -like

Topic 13: Quantum and Nuclear physics - . “the wave nature of matter”. matter behaving as a wave? ridiculous!.

Option B Quantum and Nuclear Physics - . also know as topic:13 these notes were typed in association with physics for use

Physics Nuclear Physics: Nuclear Reactions - A place of mind. faculty of education. department of curriculum and

Quantum Physics - . what makes one atom different from another?. the amazing colors produced in fireworks are a result of

QUANTUM PHYSICS - . what is it? a group of scientific theories and studies that at first pretended to find an explanation