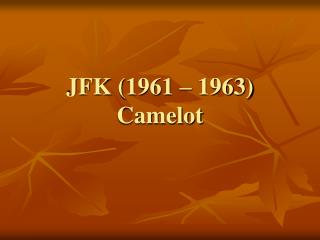 JFK - . kennedy’s presidency. surrounded himself with the “best and the brightest” the kennedy family was extremely

JFK - . by: t.j hoppen. jfk. events during his presidency included the bay of pigs invasion, the cuban missile crisis,

Camelot - . by: ivee b gedell. camelot. first appeared in the 12 th century somewhere in britain camelot is the most

JFK… - . think/ look back over hw and movie notes... how did cuban missile crisis get resolved? in what ways did cold

JFK - . life, presidency and assasination. an icon is born…. born to parents joseph p. kennedy and rose fitzgerald on