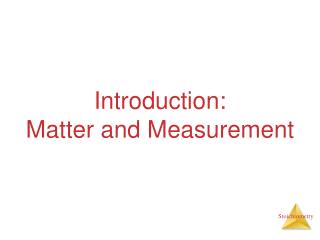 Introduction: Matter and Measurement. Units of Measurement. SI Units. Système International d’Unités Uses a different base unit for each quantity. Metric System. Prefixes convert the base units into units that are appropriate for the item being measured. THE METRIC SYSTEM. Guide to the expression of uncertainty in measurement

Measurement Systems Analysis: What is it and why should I care? - . dec. 11, 2012. barry kulback global lean six sigma

Unit 1: Observation, Measurement and Calculations - . cartoon courtesy of nearingzero.net. i. introduction to chemistry.