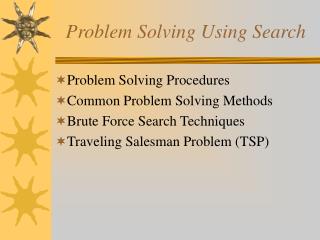 Problem Solving and Search in AI Heuristic Search - . heuristic search. problem with uniform cost search we are only

Problem Solving - . shortcuts through the problem space. problem solving. problem = a situation in which one is trying to

RE-THINKING HIGH SCHOOL - . should a catholic high school look like a high school?. start thinking:. do we need a