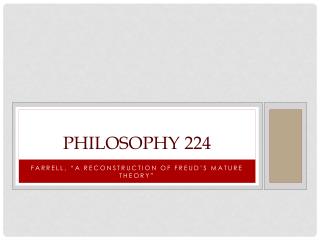 Jean Watson The Philosophy and Science of Caring - . by amanda buisman and stephanie kimbrel.

Create an online Career Plan that showcases the Computer science skills you’ve learned - What you learn in cse 3!. by:

PSYCHOLOGY - . anxiety disorders. bell ringer/notes. make a 7 column chart in your notebook for broad categories of

Philosophy 224 - . expanding the concept: pt. 2. taylor takes as his starting point the buddhist doctrine of anatta :

Principle and philosophy of education - . yahya ghaedi. starting questions. why you teach or learn? what is philosophy?

A Summary! - . what we have covered to date!. history of settlement in ireland (hand-out). factors that influence

Why Study a Foreign Language? - . studying a foreign language will enhance a ku major or minor in:. european studies

Philosophy 224 - . emergence of the concept part 1. reading quiz. which of the following is not a part of the soul as