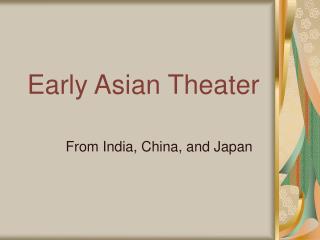 Early Asian Theater. From India, China, and Japan. Indian Theater. Sanskrit Drama Written in Sanskrit, the language of the noble classes and performed in court circles The Natyasastra as example of Indian theatre Set and scenery Costumes Dance and movement. The Pacific Asian Theater - Pearl harbor. on december 7th, 1941, japan attacked the u.s. naval base at pearl harbor in

Course of the War Pacific/Asian Theater - . japan’s military might. jap leaders were encouraged by ger’s rapid

Theater - . bambang purwanto. movie/film. a recording of moving images that tells a story and that people watch on a

Epic Theater as Pedagogical Theater - . last time… one of the goals of epic theater is to interrupt our pity, doing so

National Theater - . by: michael hoff. the national theater. the theatre was commissioned in 1810 by king maximilian i of