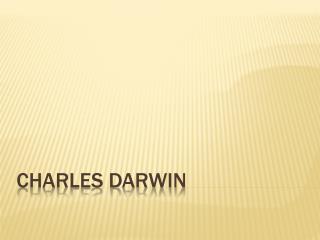 CPS Learning Webinar to share PME insights for the Darwin Initiative Project - . enhancing the relationship between

Lesson Overview - . 16.1 darwin’s voyage of discovery. think about it . if you’d met young charles darwin, you

Charles Darwin - . “. . .a theory of descent with modification through variation and natural selection.”. the