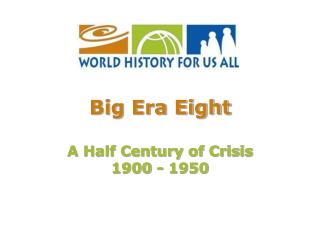 Big Era Eight A Half Century of Crisis 1900 - 1950. Why is Big Era Eight about crisis?. Three major events shook up the modern world system that had been created during Big Era Seven. Depression. World War II. World War I. What could the crises of Big Era Eight upset?. They could upset The “Modern” Era 1900-1950 - . the event: wwi. led to… loss of innocence disillusionment/increased cynicism

A Century and a Half of Care - . the benjamin franklin papers at the american philosophical society library. american

PROGRESSIVE ERA 1900-1920 - . elements of reform. theodore roosevelt was an ambitious man whose eagerness to leave a mark

MODERN ERA: 1750 - 1900 - . changes in the nature and functions of state structures. revolutionary ideas. revolution a