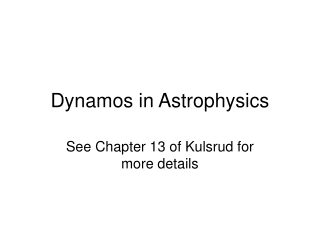 Dynamos in Astrophysics. See Chapter 13 of Kulsrud for more details. Some Fundamental Questions. Where do magnetic fields come from? How can seed fields be amplified? How can fields avoid decaying? MHD Dynamos in the Lab and Dynamos Beyond MHD - . the lab plasma dynamo does generate current locally increase toroidal

Calorimetry in Astrophysics - . direct measurements of particles/photons in space use of the atmosphere and rocks for

ASTROPHYSICS - . summary. constellation is a group of stars that form a pattern as seen from the earth, but not bound by