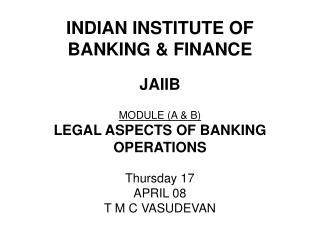 Creativity, Passion and Innovation in Finance, Banking and Law - Can banks be at the forefront of financial innovation,

LEGAL &amp; REGULATORY ASPECTS OF BANKING A &amp; B jaiib - . 01..day to day banking involves a number of