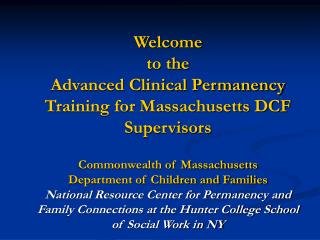 Welcome to the Advanced Clinical Permanency Training for Massachusetts DCF Supervisors Commonwealth of Massachusetts Department of Children and Families National Resource Center for Permanency and Family Connections at the Hunter College School of Social Work in NY. Adoption &amp; Foster Care - . step parents. what are their legal rights &amp; responsibilities? must care for

FOSTER CARE AND ADOPTION - . 1. foster care a. foster parent: a person who cares for a minor at the order of the court

History of Social Welfare - Caring for the stranger. the united states has a tradition of caring for the destitute which

Adoption from the Public Child Welfare System - . a brief legislative history of the child welfare

Adoption from the Public Child Welfare System - . a brief legislative history of the child welfare

Welfare states and its history - . peter lindert. most of the historical data and the arguments are based on peter