IMAGE OF GOD VS LIKENESS OF GOD - PowerPoint PPT Presentation 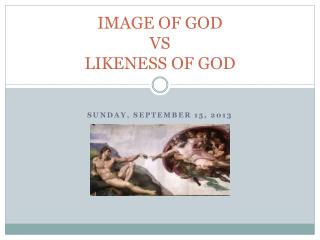 IMAGE OF GOD VS LIKENESS OF GOD

IMAGE OF GOD VS LIKENESS OF GOD

God and Creation - Basic bible teaching lesson 2. god and creation. objectives. to explore: the existence of god the

KINGDOM WAS AND IS OUR PURPOSE - . text: gen 1:26 then god said, &quot;let us make man in our image, in our likeness,

Genesis 1:26 - 26 and god said, let us make man in our image, after our likeness: and let them have dominion over the

God and Creation - . lesson two. apostles’ creed. creed = a statement of faith or belief. the god of the bible. he is

GENESIS Jesus the Son of God - . jesus the son of god. “god so loved the world that he gave his only son, so that

Body, Soul, and Spirit - . “and the lord god formed man of the dust of the ground, and breathed into his nostrils the

God’s Who-ness and Our Image - . navs sunday. the road map. what is the benefit of knowing god? who is god and how can

“So God created man in his own image, - In the image of god he created him; male and female he created them.” (

Care for God’s Creation - . spiritual growth project. all five blogs are due on thursday, may 15 th options if you need

MAN - . “god created man in his own image; he created him in the image of god; he created them male and female”

Basic Bible Doctrine - . man and sin. is it appropriate to use the word “man” to refer to the entire human