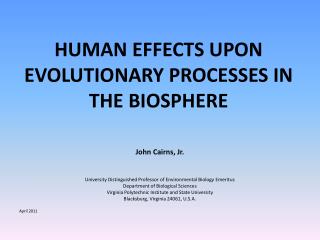 Evolutionary Processes - . chapter 24. populations. group of individuals from the same species that live and breed

Human Impacts on the Biosphere

Human Impact on the Biosphere - . those pesky humans!. humans have a large impact on the environment and the organisms we

EVOLUTIONARY PROCESSES AND PATTERNS - . theories of species creations and diversity prior to evolutionary theory theory

The Effects Of War Upon Individuals - . effect: destruction of innocence

Objective: Analyze the effects of physical and human processes on the - P ast and describe their impact on the p resent.

Human Effects - . on soil, water and air. in this slideshow. we will examine: humans and the environment human effects on

The major approaches to analyzing evolutionary processes: - The importance of experimental studies in evolutionary

Legacies of Human Evolutionary - . history: effects on the individual. question:. does the flexibility of human