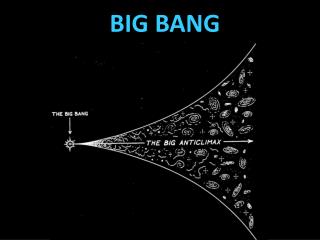 Big Bang - . a trip to the beginning of the universe. by stefan diehl. overview. introduction history of the

Big Bang - . big bang is a korean group formed by 5 soloists and managed by yg entertainment . the group members are :

The Big Bang - . the explosion that created _______ a point in space exploded, and that explosion continues to grow today

The Big Bang - . morgan o’dell mrs.butzin 4 th 2013 the main idea is the big bang is made up with lots of stuff like

The Big Bang - . lemaitre was the first to point out that if the universe is expanding, it must have been much hotter and

After the Big Bang - . prof. lynn cominsky dept. of physics and astronomy. golden age of cosmology. how did the universe

Big Bang Theory - . investigative science. what is a theory?. well-established idea that is supported by scientific

Big Bang Theory - . relax, its just a theory!. what the theory says. some scientists theorize that at one time, all of