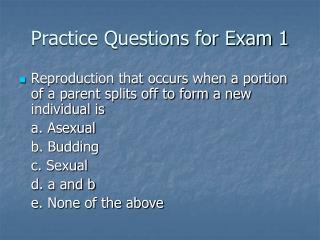 Practice Questions for Exam 1. Reproduction that occurs when a portion of a parent splits off to form a new individual is a. Asexual b. Budding c. Sexual d. a and b e. None of the above. Which one of the following regarding the protozoans is false ? a. They are often colonial 312-50 Practice Exam Questions - Now you can pass your eccouncil 312-50 exam in the first attempt by certs4you. our

PHY504 Midyear Practice Exam Questions - . please keep in mind that you will have 3 hours to complete the january exam,