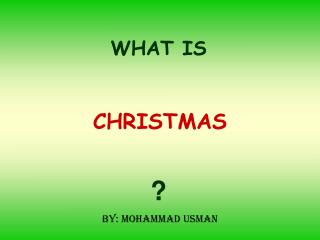 CHRISTMAS. WHAT IS. ?. By: Mohammad Usman. On this Day Gifts are exchanged, Christmas Tree is decorated & Gift from Santa Claus is expected. Christmas. Is a Christian Holiday which falls on 25 th December and celebrated by Christians as Jesus Christ’s Birth Day. Christmas - . the celebration of christmas. the arriavl of baby jesus. we celebrate christmas on the 25 th december . it

CHRISTMAS - . christmas tree. interview. k; hi danka d; hello kate, how are you now? k; i am fine, thanks. because very

Christmas - . nikola hurtová. christmas. this largest and most important christian holiday is celebrated in many

“Christmas “ - . customs. “ christmas in our area”. christmas is a great religious  holiday and takes place on

CHRISTMAS - . isaiah 7:14. &quot;therefore the lord himself will give you a sign: behold, the virgin shall conceive

Christmas - . questions. what is it called c hristmas why is it important because it is jesus birth when and where does

Christmas - . adrienne gibbons. i love christmas because i get gifts from family and friends. then its my birthday!.

Christmas - . by peter. we celebrate c hristmas because it is jesus’ birthday. in the past the kids ate turkey and mom