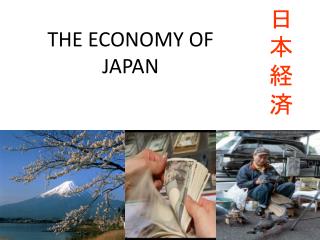 THE ECONOMY OF JAPAN THE ECONOMY OF JAPAN

Japan - . by shay. i found my information in the book fiesta japan. culture. in japan. the culture in japan is buddhism .

Japan - . where is japan?. japan is located in the continent of asia, with neighbours including russia, china, north

Modern Japan - . what we will learn today:. what did the united states do to japan after wwii? how did japan become an

Japan - . japan: timeline. fun factoid. japan has “always” had an emperor japan has only had one dynasty (all

METI (Ministry of Economy, Trade and Industry) JAPAN - . for further development in the computer related services (for

Converting the Economy - . the united states’s industrial output during world war ii was twice as productive as germany

Imperialism in Japan - . japan. since the early 1600s, japan was led by shoguns military dictators the tokugawa family

Japan - . background info. map. tokyo is the capital of japan japan’s three borders are the sea of japan, the north

Japan - . japan. japan a series of islands off the coast of asian continent bordered by pacific ocean and sea of