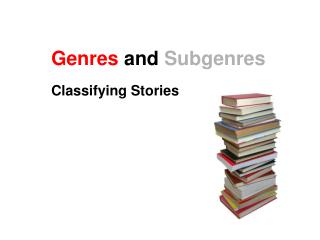 Genres and Subgenres - . categories of writing. genre = category. writing can generally be categorized by genre , then

Genres and Subgenres - . a lesson in classifying stories!. genre. the word genre refers to a particular type or kind of

Genres and Subgenres - . 4 april. brainstorming- what genres can you name?. what is your favorite genre?. adventure. the

Genres and Subgenres - . classifying stories. genres and subgenres. texts can be separated into groups called genres and

Genres &amp; Subgenres - . classifying what you read. genres and subgenres. texts can be separated into groups called

Genres and literature - . genre means : a category (class), or the type of writing style or format. mrs. kovacs. all

Genres and Contexts - . genre . genre – commonly practiced and accepted form or model of communicating; each form is

Genres - . poetry. type of literature in which words are carefully chosen and arranged to create certain effects. (uses

Genres and Literature - . when you speak about genre and literature, genre means a category, classification, or the type

Genres - . fantasy. fantasy is a genre that uses magic and other supernatural forms as a primary element of plot, theme,

Genres - . know what you want!. genre definition. pronounced: zhän ’ re ( french) a particular type or category of

Genres - . what are they?. genre. genre is a french word which means “type or kind” we use genres as a classification