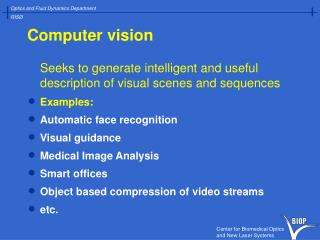 Chapter 9 Linking Vision and Change - . vision. having a vision is often linked to why successful organizational change

Security Awareness 101 ……and Beyond - . “vision without action is only a dream action without vision is merely

AOTA’S CENTENNIAL VISION: WHAT IT IS, WHY IT’S RIGHT - . overview. what is the centennial vision? timeline and

Chapter 2: Image processing and computer vision - . camera models and parameters. you will learn these in this chapter.