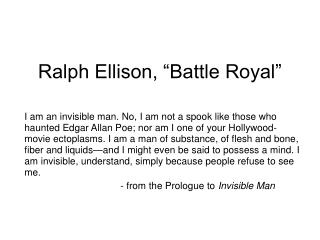 Andy Ellison Swing Band - Make your special day a perfect one with andy ellison wedding jazz band. we have vast

Vocabulary in Battle Royal - . how to record vocab . number each item include the part of speech ( pos ): noun, verb,

By: Connor Ellison - Marco polo. by: connor ellison. he was born in 1256 in the country of italy. he sailed for the

Ralph Ellison Imitation - . brainstorm. think back to conflicts you have witnessed between two other people. list as many