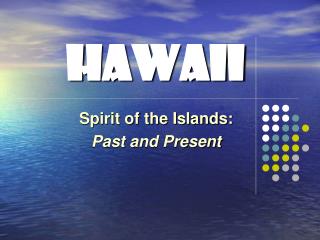 Hawaii. Spirit of the Islands: Past and Present. Hawaiian tradition describes the land (‘aina) as mother ‘Aina means “that which feeds” Land does not belong to the Hawaiians, rather Hawaiians belong to the land and are a part of the land. Hawaiians regard themselves as “kanaka maoli”. Hawaii (Big Island) - . hawaii is the bigest island and is home to 11 of the world’s 13 climactic zones visit black

Hawaii (Big Island) - . hawaii is the bigest island and is home to 11 of the world’s 13 climactic zones visit black

Hawaii - . location hawaii is in the middle of the pacific ocean. history. native people: polynesian discovered 1778, by

Hawaii Anti-Neutrino Observatory - . for the hanohano collaboration: steve dye university of hawaii at manoa and hawaii

HAWAII - . by latisha taylor 1 st period 2010. picture of this state. this is hawaii. motto or nickname. the nickname is

A Trip To Hawaii - By wilson and taylor. a trip to hawaii. four facts about hawaii. the state bird is the nene. the state

Hawaii - . by: j. cole and j. guthrie. peak season. prices: in peak season in maui hawaii at the maui coast hotel it is