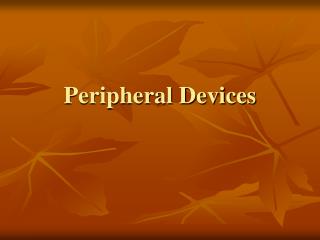 Peripheral Devices. Keyboards. Keyswitch Keyboards- employ an individual switch under each key- a plunger moves downward in response to a key press, making a connection between two signal lines coming from the keyboard controller Inexpensive Simple to make Simple to service

Peripherals and their Control An overview of industrially available “peripheral devices” - . some ideas for

The Components of a Computer and its Peripheral Devices - . presented by nicholas landreth-smith btt20. what are the main

Input, Output and Storage Devices - . input and output devices. we use lots of different products when producing work on

INPUT OUTPUT DEVICES - A computer system needs to communicate with its external environment its user). the input/output