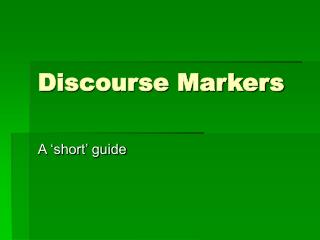 Discourse Markers. A ‘short’ guide. What are they and why should I care?. They add meaning They warn of upcoming types of information They structure speech or writing Correct use is a sign of advanced English knowledge. with regard to, regarding, as for .

Discourse Styles - . spoken vs. written english. types of discourse. there are many ways to classify discourse:

On the extended uses of evidential markers in Korean: Diachronic and discourse perspectives - . mikyung ahn and foong ha