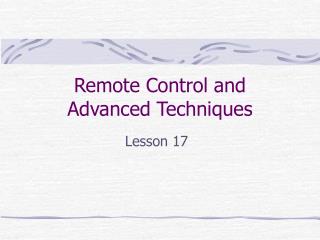 Remote Control and Advanced Techniques Lesson 17 Remote Control Software With global corporations, support personnel who can deal with computer problems may not always be on-site. They may use remote control software to allow them to provide support and maintenance from a central location. Dynamic Branch Prediction - . so far, we looked at hardware techniques to reduce hazards from data dependences and name

39: Advanced Airway Management - 8-1.1identify and describe the airway anatomy in the infant, child, and the