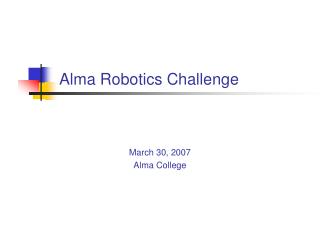 Lesson 95 - . alma counsels shiblon alma 38. shiblon. he was the son of alma, grandson of alma the elder he was described

Alma 30 - “atheist do not go to god for the same reason thieves do not go to policemen” (marion d. hanks). korihor.

Sample PowerPoint Presentation - . this presentation was made using powerpoint 2003. it will work best if your have a