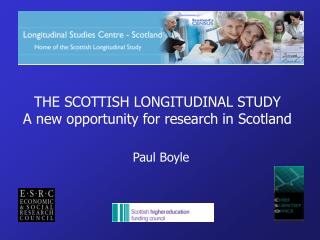 THE SCOTTISH LONGITUDINAL STUDY A new opportunity for research in Scotland

THE SCOTTISH LONGITUDINAL STUDY A new opportunity for research in Scotland Paul Boyle The (Scottish) Longitudinal Study Why does Scotland need a SLS? So, what is the SLS? Strengths and weaknesses How does the SLS differ from the LS? How far have we got? Governance issues Security issues

THE SCOTTISH LONGITUDINAL STUDY A new opportunity for research in Scotland 5 of the Worst Places to Lose Your Keys in Scotland - There really is no good place in scotland to lose your car keys. we

Better Opportunity for Those who want to Study in Canada - Canada occupies the northern half of north american continent;

Scotland - . with. !. hopping on october 2003. let’s take one of those scottish (single track) highways to the

Isles in Scotland - . by the marvellous mull islanders (hubert,keir,bilge and stephanie) . how many islands are their in

Scotland - . in room 33 we have been studying the national anthems of the teams in the rugby world cup . our g roup g ot

Boyle's Law - . for a fixed amount of gas at constant temperature, pressure is inversely proportional to volume.

Scottish clans and traditions  of highlanders - . clans. the gaelic word « clan » means « children » , but it is