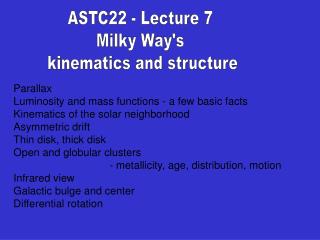 Lecture 9 : Stellar Structure - . robert fisher. items. average score on midterm 1 was 23 out of 30, with a standard

Hidden Markov Model - . cs570 lecture note kaist. this lecture note was made based on the notes of prof. b.k.shin(pukyung

Chapter 2 - . motion in one dimension. dynamics. the branch of physics involving the motion of an object and the