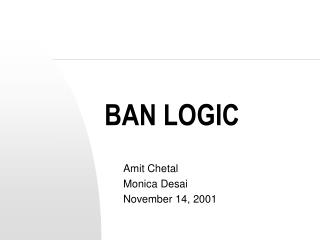 BAN: A Logic of Authentication - Concordia university . design and analysis of security protocols (inse 7100) . ban: a

SMOKING BAN - . rachel gwaro cas 100a. let’s support the smoking b an. what is smoking ban? what is second hand smoke?

Shigeru Ban - . there are a few ineluctable facts about buildings. they are expensive, time consuming and labor intensive

2-4 Rules of Logic - . what is deductive reasoning? what is the law of detachment? what is law of syllogism?. you used

Logic - . what is logic?. logic is a system of rules for proving something is true, assuming other things are true. why

Logic, Shift, and Rotate instructions - . logic instruction. the ability to manipulate individual bits is one of the