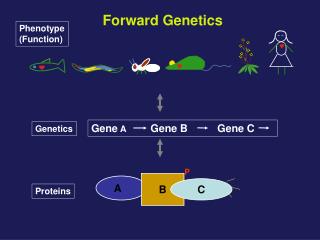 Phenotype (Function). Forward Genetics. Gene A Gene B Gene C . Genetics. P. B. A . C. Proteins. Survey. In classical or forward genetics, we commonly use chemicals or radiation to generate mutations in model organisms such as yeast, worm, fly or mouse. Forward genetics - . finding genes in thiomicrospira crunogena that are necessary for growth under low co 2 conditions.

Forward Genetics - Letting the genome tell you what genes are required for the biological process you are studying.

Forward Genetics - Begins with a mutant (altered) phenotype and addresses the question, “what is the genotype?” or

Genetics - . genetics. bell: what is genetics? study of heredity passing of traits from parents to offspring traits-

Genetics - . probability and punnet squares. objectives. by the end of class you will know: how to indicate the

GENETICS - . unit 7. allele. how we inherit our genes each human offspring inherits one maternal set of 23 chromosomes

Genetics - . genetics. genetics is the science of heredity genetics explains how genes bring about characteristics in

Genetics - . genetics. what is genetics ? study of inherited traits what is heredity ? passing of traits from

GENETICS - . 1. gregor mendel. genetics =the branch of biology that deals with heredity . a great deal of what we know

GENETICS - . cells and heredity. cell theory. a l l organisms are made of one or more cells. the cell is the basic unit

Genetics - . punnett square practice. genetics practice problems . 1. for each genotype below, indicate whether it is

Genetics - . the study of heredity. heredity the passing of traits from parents to their offspring causes children to