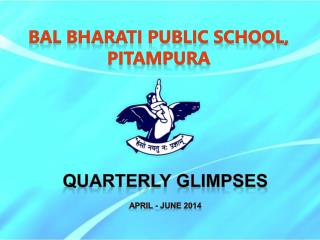 BAL BHARATI PUBLIC SCHOOL, PITAMPURA. QUARTERLY GLIMPSES APRIL - JUNE 2014. SCHOLASTIC. The school has been striving constantly to ensure that the children do well in academics . This year too, the students of classes X and XII have done us proud. ACADEMIC ACHIEVEMENTS. CLASS-X RESULT. Quarterly Review April 2014 - . define acceleration. what causes objects to accelerate?. a measure of the change in

Quarterly Review April 2014 - . what factors cause an object to accelerate?. a measure of the change in velocity during a