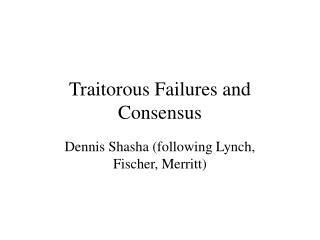 Traitorous Failures and Consensus. Dennis Shasha (following Lynch, Fischer, Merritt). Problem Statement 1. Three generals A, B, and C. At most one is a traitor. The traitor knows the protocol and the inputs of the others. THE CHARTER SCHOOL DEBATE FULL OF SOUND AND FURY, BUT WHAT DOES IT SIGNIFY? - . consensus fall, 2006. why conduct a

Summary of AMS-02 Significant Anomalies and Failures - . this presentation will:. highlight updates to anomalies and

1. The achievements and also the failures of the British monarchy has been important - Issues in the discussion

Louis XIV - . the sun king. today we will…. describe how louis xiv strengthened royal power in france. explain why

ARD ETIQUETTE - . what you should and should not say and do in an ard meeting. substantive satisfaction. the “meat”

Analysis of the Intended Mathematics Curriculum as Represented in State-Level Standards: Consensus or Confusion? Barbar

Unit 6: Market Failures and the Role of the Government - . 1. what is the free market? (capitalism). 2. 5 characteristics

Bit-efficient consensus - . michał strojnowski. the byzantine generals problem. n entities each has its value they